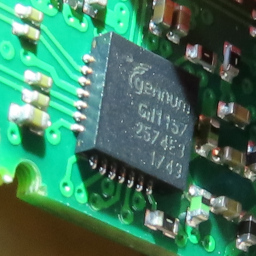 On one of the usual sources of weird electronics I came across quiet unusual SFP+ module and could not resist buying it to see how it works. For now I was unable to make it work, but at least I made few photos of its internals. It turned out its main part is obscure chip made by Semtech and described as GN1157, which serves as laser diode driver. Obviously obtaining datasheet is impossible even in China. However, thanks to being able to see the board, I was able to reverse engineer some part of its pinout.

Just in case somebody needs it, here it is:

As can be seen in the table above, on the board there is another important chip – 8051 MCU, but I was not able to get more information on it, beside fact that it is connected to this driver via separate I2C bus. It would be interesting challenge to try extracting this MCU’s firmware, but as I have two of these modules and I plan to have them working together to see how CPRI transmission looks like in Wireshark, I don’t want to break any of them. I already have Banana Pi R3 for that purpose, but there is some issue with using SFP connectors, so for now my problem is finding time to debug the issue 🙂 Till then, here are some photos of mentioned SFP+ module made for Nokia and marked as IAB410060001.