NOTE: This post was imported from my previous blog – v3l0c1r4pt0r.tk. It was originally published on 1st November 2013.

This post is the second part of the Instructable mentioned on the previous post. That’s tutorial on how to make simple FM radio using GRC. That task is in my opinion the simplest project that can be made using GRC so it’s in fact beginners guide to GNU Radio which is really capable software. I hope that it is only the first my project using that software.

It isn’t hard to find GRC projects that implements FM radio functionality, that’s a fact. But when it comes to reproduce them so they are working just like SDR# you’d realize it’s a bit harder task. At least I did. I found about a three such projects but there was never any included project file and the only materials was video or pictures. I admit the video has pretty good explanation but it still wasn’t enough. The rest was even worse. They were only blog posts with few screen shots and short description. So finally to reproduce functionality of SDR#’s FM radio I had to think on my own. And after few hours I did what I tried to do.

A bit of theory

But let’s start at the beginning. The first thing that you need to do to start creating your own FM receiver using GRC is to find FM station that can be received without disruptions so you can check if your program works as well as i.e. SDR#. It can be done with help of SDR# and when you found one you are ready to learn some theory about FM signal processing. In fact it could be omitted, but in my opinion it is better to know a bit. I personally am not any specialist in radio theory so it will be really simple and I might be wrong somewhere so if you find any mistake in that what I will write here just let me know in comments.

There can be few other elements depending on input and output sample rate, if it will be possible to match them using only above elements there won’t be any other. So our task will be getting signal using RTL-SDR, passing it through low pass filter and FM demodulator and outputting on PC’s sound card. Meanwhile we will also need to match the sample rate of the input to the one of the output (2 MHz in to 48 KHz out). All elements of this circuit can be found by writing part of its name while list on the right is selected. Element’s names are the ones used as section header below.

Our signal input. We need to set its sample rate to 2M. It can be done by editing samp_rate variable and setting its value to 2e6. We need also to set the frequency of the station we want to receive. It is good practice to add every value that might be changed in the future as standalone variable. This can be done by adding Variable block from Variables category or, if you want to have possibility to edit it during the runtime block named WX GUI Slider or WX GUI Text Box and then just writing variable name as value in block’s properties.

Now we need to convert sample rate from 2M (samp_rate) to 500K which I realized is the best value for low pass filter’s input rate. To do that we need to add another variable, named i.e. quadrature, set its value to 500e3 (means: 500K). With that we need to add rational resampler’s block and set its decimation value to int(samp_rate/quadrature). Of course its input on the schematic should be connected to output of RTL-SDR Source (can be achieved by clicking on blue out on one block and then blue in on another).

The next step is to filter out frequencies other than the one we centered in th previous step. In that task we will use a low pass filter block. We here set cutoff frequency to 100e3. This is because that’s standard band’s width. I don’t know what correct value for transition width should be, but trying to change that I found that the higher value the better so it’s finally set to 1M. Obviously it should be connected to resampler’s output.

Now we could do the nearly final and the most important step: placing the FM demodulator. In my case its quadrature rate equals 500k (that’s the same value as before so I set this to the value of quadrature variable). I don’t know if it could be changed to something else so if you are not sure just leave it as is. In that setting it should work.

Next Rational Resampler and Multiply Const

These elements’ job is to match the signal’s rate to the one supported by sound card and provide volume regulation. At first we need to convert rate from 500k to 48k so we need to decimate by 500 and then multiply by 48. In the second block we set const to volume. Now we can create variable or place WX GUI Slider with variable name set to volume. As you can see here color of WBFM demodulator is different than rational resampler’s and multiplier’s in and out. To change that you need to select them and use up and down arrows on your keyboard.

That one’s function is to output signal on our sound card. Now its only required to edit its rate and choose 48k from a drop down list and that’s it! If you don’t have that option just choose the biggest value and edit value in rational resampler and it should work. Now you should be able to execute your program and test if it works. To hear anything it will probably be required to increase volume to about 50.

If you don’t know how some part has been done or what value should have a particular variable below you can download projects that I’ve made first learning to use GRC myself and then preparing this tutorial. There is one project presented here and one made earlier. 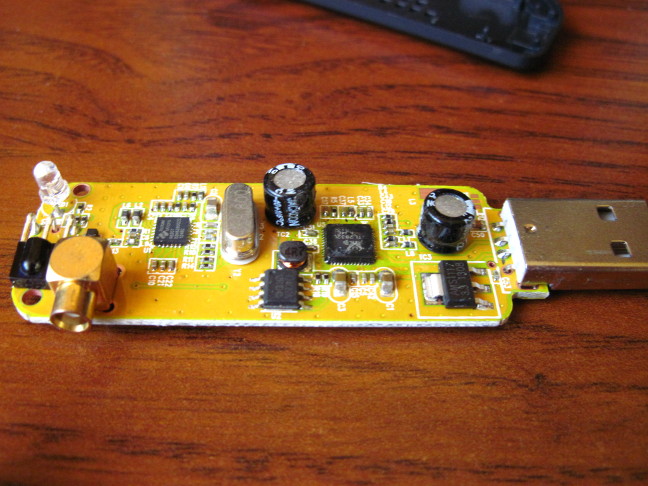 NOTE: This post was imported from my previous blog – v3l0c1r4pt0r.tk. It was originally published on 1st November 2013.

First post about hardware was to be something different. Unfortunately it looks like that project already failed so it probably will never be published. Instead I’m starting, I hope series of posts, about cheap Software Defined Radio dongles based on RTL28xxU chips. This post will be short introduction to the topic of RTL-SDR and it will mostly be the same as my Instructable here.

If you get here I imply that you already know what SDR is. If you don’t take a look at Instructable linked above. Getting one is for yourself should be easy. There are lots of offers on ebay that have names of chips included in the title so you should just search for rtl-sdr and i.e. R820T. That chip is one of the most capable and cheap in contrast to E4000.

The only things we will need here is some Linux distro and of course a tuner. As Linux I recommend Arch, because of availability of packages required and simplicity of its installation. There would be good if you have better antenna for the tuner and in that case you should also have adapter to standard antenna connector.

If you are ready you can now connect your dongle to PC and check using dmesg | tail or journalctl if it is has been detected by your system and if it contains appropriate chips.

If you chose the one with R820T it is probably required to disable default dvb_usb_rtl28xxu drivers, because, at least in my case, after disconnecting the dongle system hangs and the reason is for sure fault of that particular driver. You can disable it by creating new .conf file in /etc/modprobe.d directory. It could be done i.e. by typing # nano /etc/modprobe.d/blacklist.conf in console. The file should contain one line: blacklist dvb_usb_rtl28xxu. You also need to add that file to FILES variable in /etc/mkinitcpio.conf so it looks like that:FILES=”/etc/modprobe.d/blacklist.conf” and generate new initrd file by using # mkinitcpio -p linux. Now after restarting your computer everything should be OK.

Now we will need to install few packages to make RTL-SDR up and running. rtl-sdr and sdrsharp-svn are needed for basic functionality. You probably also want to install gnuradio and gr-osmosdr-git to make more advanced things like analysis of digital signal transmitted at 433 MHz. rtl-sdr is the main driver and can be installed on Arch from community repo:

The most capable software for RTL-SDR is GNU Radio and its graphical tool: GNU Radio Companion. It is also available on AUR (name: gnuradio). It is also required to install package gr-osmosdr-git from AUR in order to use RTL-SDR dongle as source in GRC. Its usage tutorial is available in the next post and as continuation of Instructable mentioned at the beginning of this post.

Now if you already installed all the required software you can try to find a radio station at about 100 MHz to check if everything is working fine. As mentioned earlier you could be able to listen to only the strongest stations on the default antenna. Finding one good signal will be useful in the next tutorial. At the end I’m enclosing screenshot of SDR# with settings proper to receive FM station.