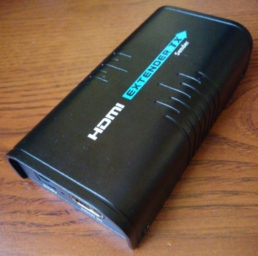 NOTE: This post was imported from my previous blog – v3l0c1r4pt0r.tk. It was originally published on 19th August 2017.

Recently, I bought LKV373A which is advertised as HDMI extender through Cat5e/Cat6 cable. In fact it is quite cheap HDMI to UDP converter. Unfortunately its inner workings are still more or less unknown. Moreover by default it is transmitting 720p video and does not do HDCP unpacking, which is a pity, because it is not possible to capture signal from devices like cable/satellite TV STB devices. That is why I started some preparations to reverse engineer the thing.

Fortunately a few people were interested by the topic before (especially danman, who discovered second purpose for the device). To make things easier, I am gathering everything what is already known about the device. For that purpose I created project on Github, which is to be served as device’s wiki. Meanwhile I was also able to learn, how more or less firmware container is constructed. This should allow everyone to create custom firmware images as soon as one or two unknowns will be solved.

First one is method for creation of suspected checksum at the very end of firmware image. This would allow to make modifications to filesystem. Other thing is compression algorithm used to compress the program. For now, it should be possible to dissect the firmware into few separate fragments. Below I will describe what I already know about the firmware format.

Whole image starts with magic bytes ITEPKG, so this is how I call outer container of the image. It allows to store data of few different formats. Most important is denoted by 0x03 type. It stores another data container, that is almost certainly storing machine code for bootloader, and another entity of same type that stores main OS code. This type is also probably storing memory address at which content will be stored after uploading to device. Second important entity is denoted by type 0x06 and means regular file. It is then stored internally on FAT12 partition on SPI flash. There is also directory entry (0x05), that together with files creates complete partition.

Another data container mentioned on previous section is identifiable by magic SMEDIA. It consists of two main parts. Their lengths are stored at the very beginning of the header. First one is some kind of header and contains unknown data. Good news is that it is uncompressed. Second one is another container. Now the bad news is that it contains compressed data chunks.

This container’s function is to split data into chunks. One chunk has probably maximum length of 0x40000 bytes (uncompressed). Unfortunately after splitting, they are compressed using unknown algorithm, behaving similarly to LZSS and I have some previous experience with variant of LZSS, so if I say so it is very likely that it is true 🙂 . As for now, I reached the wall, but I hope, I’m gonna break it some time soon. Stay tuned!